The Focus Group was established in October in order to enable greater resident participation in the identification and promotion of potential solutions to safety concerns arising from the increasing volume of traffic in Twyford parish.

Concerns about speeding are compounded by narrow roads (including sections of the High Street) and the absence of pavements along parts of the High Street, Hazeley Road and Shawford Road (especially across Norris’s Bridge). Traffic volumes also make crossing roads hazardous due to the shortage of formal crossings and the large number of HGVs terrifies cyclists as well as pedestrians.

The number of casualties involving serious injury are regarded by Hampshire County Council and Hampshire Constabulary as low; but damage to vehicles or other property without personal injury as well as ‘near misses’ are not recorded. This has resulted in some accident prone locations not being remedied and an absence of police speed enforcement on the Main Road (B3335 and B3354).

The Parish Council has purchased 2 SLRs in the last couple of years. The number of locations where they are deployed has gradually increased but are restricted to maximum speeds of 30 and 40 mph. Data about the date time and speed of passing traffic is now gathered and has been collected (and will be available on this website soon).

Care must be taken when interpreting summary information because of a number of factors. For example days on which units are moved will miss some activity and a daily average will have results from two locations. The units also record the first identified movement so those located near the 30 mph boundary (e.g. Hazeley Road) record vehicles approaching them but not yet in the 30 mph limit.

The Parish Council in October 2021 resolved to seek a 20 mph speed limit as a default in existing 30 mph areas of the parish that people live, work and play.

Currently Hampshire County Council policy does not enable a 20 mph zone to be applied for, even if the necessary costs of consultation and implementation were funded by the Parish Council and other sources. HCC has however announced a review of its current policy [link]

The Parish Council is actively assisting the 20’s Plenty Campaign in Hampshire.

Where the police utilise camera based enforcement it is possible to promote adherence to the speed limit by use of signs warning that the camera may be operating. As such enforcement currently occurs on Hazeley Road these signs have been requested and are being installed. A request for enforcement on the B3335 has been declined. The grounds referred to by the police will be monitored to enable further requests if circumstances enable commencement of enforcement in accordance with existing casualty reduction criteria.

The Parish Council is not the Highway Authority and can only lobby Hampshire County Council where evidence of valid safety concerns needs to be considered despite the County Council’s focus on Casualty Reduction when funding infrastructure changes itself. Residents should be aware that many road infrastructure costs are met by developers that are required to pay for road improvements as a condition of their planning permission. The Parish Council may, however, pay for some infrastructure such as signs and road surface or roadside features listed in the HCC Community Led Initiative scheme where these are approved by the County Division Councillor. 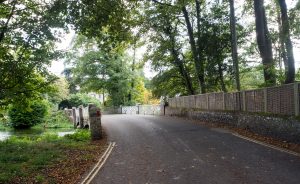 The Parish Council has from time to time raised its concerns with the County Council and local MP about the safety of pedestrians using the bridge in the absence of a pavement, especially during the hours of dusk, night and dawn. The absence of a casualty history has not yet resulted in any action.

The Focus Group has identified other Hampshire locations where a pedestrian walkway has been painted and which it believes should be capable of implementation. 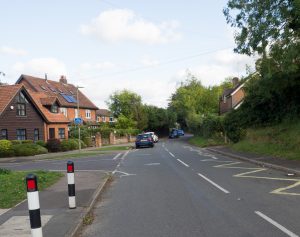 Under current HCC policy there are insufficient criteria to enable a formal crossing (involving a crossing attendant, or infrastructure such as a Pelican or Zebra Crossing). The Parish Council is currently supporting residents’ demands for improved sightlines to enable safe passage across the road by adoption of no parking restrictions.